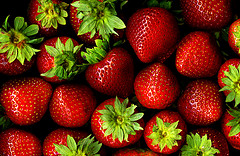 “Many foods commonly consumed in the U.S. are valuable sources of antioxidants. But researchers have recently ranked the 50 best antioxidant sources among commonly eaten foods and found strawberries to be quite exceptional. When total antioxidant capacity was measured against a uniform amount of food (100 grams, or about 3.5 ounces), strawberries ranked 27th best among U.S. foods. In addition, when only fruits were considered, strawberries came out 4th among all fruits (behind blackberries, cranberries, and raspberries).